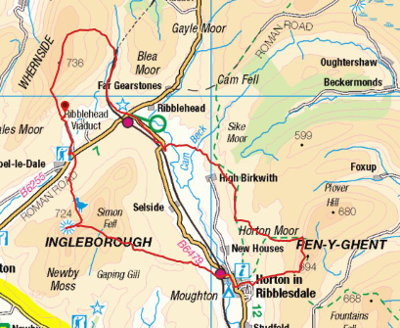 The steep section of this route from Humphrey Bottom to the foot of the Swine Tail, which was closed for repairs at the end of July, has now reopened. The steps are much improved but it is still just as steep.

The Yorkshire Three Peaks, climbing Ingleborough, Whernside and Pen-y-Ghent, is probably the original UK challenge walk. In recent years it has become incredibly popular and the National Park now estimates it is attempted by something like 100,000 people per year. Most reasonably active walkers should be able to manage the walk within 12 hours. Strong walkers will be able to do it somewhat faster and the record for the annual fell race is 2h 46min. You are unlikely to find it easy.

Most walkers start from Horton in Ribblesdale so starting from Broadrake you will be out of synch with the worst of the crowds but it's still going to be busy on summer weekends. There's pros and cons whichever way round you go but on balance I'd suggest anti-clockwise, which is the way most people starting from Horton will be going.

As the route is so popular the paths are usually pretty obvious and there are a lot of waymarks but it shouldn't be underestimated. Conditions can sometimes be challenging, even in summer, and if you flick through the Cave Rescue Organisation's incident report for last year (copies in the bunkbarn) you will see that a fair proportion of call outs are to assist parties in trouble on the 3 Peaks.
Aim to make sure you don't feature in next year's edition.

The National Park is encouraging groups to register 3 Peaks attempts. You don't have to do this but by letting them know you will help them monitor numbers and plan for the future. Registration is free and will also give you discount on 3 Peaks maps and merchandise.
Register your attempt

There is also a 3 Peaks App produced by the National Park and available to purchase for iPhone and Android.
3 Peaks App

Turn right out of Broadrake and across the field to where the path comes down off Whernside, then turn left down the track and along our access road to the B6255 just below the Hill Inn. Turn left up the main road and just past the Hill Inn take the stile on the right and go up through the field to turn right through a gate. Head across the field and into Southerscales Nature Reserve. Follow the track through the reserve straight on at first, then winging left up through the limestone scar. The track carries on through limestone pavement and past the huge depression of Braithwaite Wife Hole, then through a gate to the open moor beyond.

Climb the stone flagged and duckboarded path in front of you to reach Humphrey Bottom. From here there is a very steep section climbing up to gain the ridge. Cross a stream and go through the kissing gate before a final pull up to reach the summit plateau. The summit itself is at the far side of this plateau, with a stone shelter, cairns and trig point. Go just beyond the shelter for views down to Ingleton and across to Morecambe Bay.

Retrace your steps back across the plateau and descend a short way to a fork in the track and head right towards Horton. The plateau can be confusing in mist so make sure you come off in the right direction. The descent from here to Horton is straightforward but seems to go on for longer than you expect. Eventually you will cross the railway line, past the station to drop down into the village.

The road takes you over the river and through the village. Follow it past the Pen-y-Ghent Cafe and the campsite until just before the Golden Lion a footpath on the left takes you across a field to a minor road. Turning left again take the road for a short distance to cross a footbridge to another minor road on the other side of the stream. Turning left follow the road for about 1/2 mile until just before Brackenbottom Farm a footpath left heads up the hill.

Keep following the obvious path up to the shoulder where the route turns left and climbs steeply. There are a coule of rock steps to ascend involving a bit of scrambling so take care.As you are climbing note the distinct change in geology between the lower and upper rock steps.The lower step is carboniferous limestone and the upper one millstone grit. From the top of the steps a flagged path leads shortly to the summit.

Over the wall at the summit the path drops down to where the ground steepens, then continues diagonally down the slope before turning left and heading straight down the hill. There is a junction of tracks at the bottom of the hill and if you have a bit of spare energy it's worth a short detour out and back along the right hand path to visit the impressive Hull Pot.

If you need it there is an escape route from here - turn left and follow the track back to Horton.

Otherwise keep straight on up the short climb over Whitber Hill. In just over 1 kilometer turn right when you reach a T junction of tracks and carry on a bit over one more kilometer to where the 3 Peaks route forks off to the left. On reaching the rough track between High Birkwith and Old Ing make a short dogleg left, then right towards Nether Lodge.

From Nether Lodge take the access track across the valley bottom, cross the River Ribble and follow the hairpin climbing up past Lodge Hall to reach the B6479. Turn right and follow the road for about 1 mile to Ribblehead. The road can be busy so take care and I recommend you walk on the right.

On busy weekends there is usually a tea caravan parked here, sometimes on summer weekdays as well, and the Station Inn is just up to the left if you need refreshment, but don't forget you still have Whernside to climb.

There's another escape option from here - take the track under the viaduct and make your way via Gunnerfleet and Ivescar farms back to Broadrake.

Otherwise take the track heading for the viaduct but fork off to the right before reaching it on a path that runs alongside the railway line, past Blea Moor signal box and a creepy looking abandoned house. The path crosses the railway on an combined bridge / aqueduct, an impressive piece of Victorian railway engineering. You will see the entrance to Blea Moor tunnel on your right.

You start climbing now to reach a stile on the left. Climb the stile and continue along the path which climbs and swings right round to eventually gain the Whernside summit ridge. A little way along you will reach the summit itself, with the trig point through a narrow gap in the wall.

From the summit carry on along the ridge as it decends gradually. After about 1km you descend three steps along the ridge, each a little bigger than the one before. At the bottom of the third step the path drops off steeply to the left to a gate in a wall. Take care on this section. Through the gate the gradient eases slightly as a partially flagged path leads down off the hill. If it's clear you can see Broadrake as you descend.

Go through the gate at the bottom, then almost immediately left through another gate by an old barn and cross the field to get back to Broadrake.
Congratulations, you have completed the Yorkshire Three Peaks.